We generally think that molybdenum is a kind of silver-white metal with high hardness that has been widely used in many fields. Molybdenum is also a necessary microelement for the human body, animal and plant, and its role in medicine should not be underestimated. The following are the medical functions of the molybdenum element in the human body.

Metabolism of sugar and fat in the human body 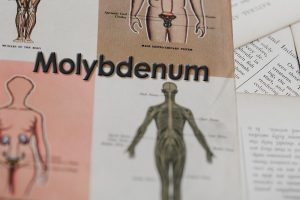 Interaction between sulfur, iron and copper

Molybdenum can participate in the interaction between sulfur, iron and copper. Molybdenum is an essential factor for the biological activity of xanthine oxidase, aldehyde oxidase and sulfite oxidase. Xanthine oxidase mainly participates in the electron transport process in the body, transports electrons to cytochrome C and oxidative metabolism of purine compounds and uric acid formation in the body. In addition, it can regulate the metabolism of iron in the body, promote the release of iron in hepatic ferritin, promote iron into plasma, catalyze the conversion of divalent iron ions into ferric ions and combine with beta 1 globulin to form transferrin for use by the body. Aldehyde oxidase is involved in the electron transport process in cells and the oxidation of aldehydes in the body, which oxidizes aldehydes into carboxylic acids and eliminates the harm of toxic aldehydes to the human body. Sulfite oxidase plays an important role in the microflora of the digestive tract of the body.

Molybdenum can inhibit tumorigenesis. Molybdenum is an antioxidant that blocks the formation of peroxides and prevents oxidative damage. Mo ions can promote the intracellular redox process, especially the carcinogenic effect of inhibiting nitroso.

Molybdenum is a component of plant nitrate reductase. The lack of molybdenum can lead to the accumulation of nitrate in plants, because the key element molybdenum must be involved in the nitrate reduction process. In the soil with molybdenum deficiency, only part of the nitrate can be reduced, which increases the content of nitrous acid in the environment and crops, and ultimately affects the intake and storage of animals and humans, which is related to the occurrence of malignant tumors. At the same time, molybdenum has a certain effect on the synthesis of vitamin C in plants, and vitamin C has a blocking effect on the synthesis of nitroso compounds (having a strong carcinogenic effect).